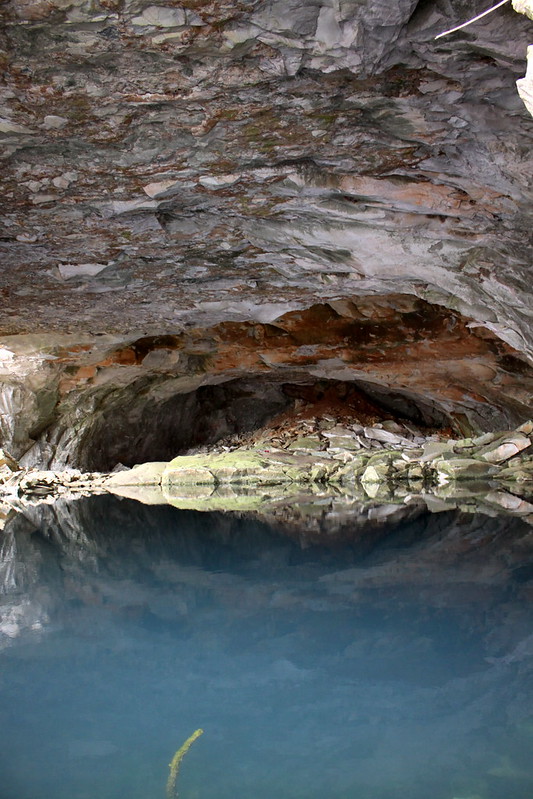 Around 1870, the Lime industry began to flourish in Erin and Houston County. Several Limekilns were built in the area and several still remain. Limestone was loaded into the fire chambers of these kilns and was converted into a fine lime powder. It was the county's biggest industry until the 1940's when the high quality limestone was depleted.

The man-made cave you see here is one of the places where the Limestone was excavated. This hill / mountain was quarried for a long time. Then, as they continued to dig, they struck a spring, which caused the cave to flood the way it is today. (The water really is that shade of blue - no photoshopping on my part to get that color!) According to legend, as the water started to fill the cave rapidly, the crew had to get out quickly and left all of their equipment down there.

The cave has three openings and two of them are easy to get to. As you drive highway TN49 (Main Street in Erin) look for the Piggly Wiggly, and you can see the lake behind it. Behind the Piggly Wiggly, there are some parking spaces and a picnic table right near one of the cave openings. From these parking spaces, you can already see one cave opening, but it's not the best one to use. (There's a No Trespassing sign at this entrance, probably because of safety concerns. Picture #4 of the series shows the view from behind the sign.) Instead, you'll want to take the path that leads around to the right for the best entrance and view. from the entrance, if you turn around and look across the outside part of the lake, you can see one of the intact limekilns.
Posted by BrentKMoore at 7:30 AM No comments: 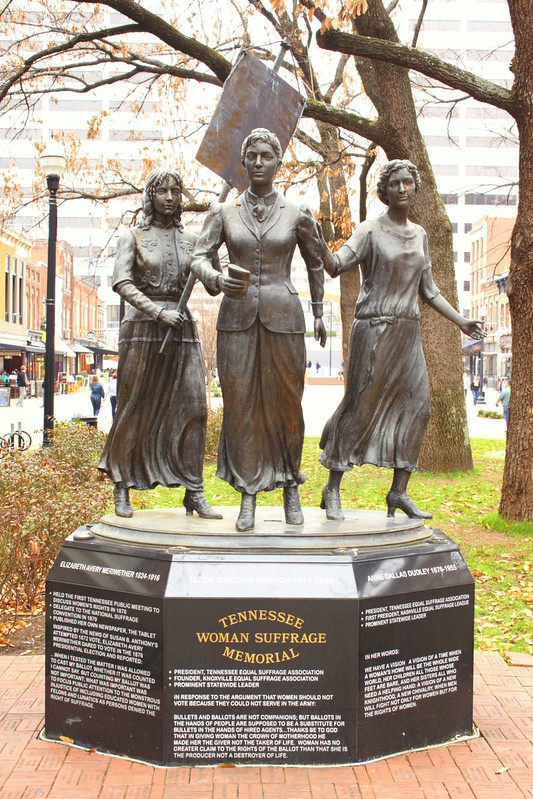 From Wikipedia:
The Tennessee Woman Suffrage Memorial is located at Market Square in downtown Knoxville, TN. It honors the women who campaigned for the state to ratify the Nineteenth Amendment to the United States Constitution to give women the right to vote. Tennessee was the final state to ratify the amendment and have it added to the Constitution, and thus was the focus of considerable effort both from local women and women who traveled from other states to assist them. The ratification vote was passed on August 18, 1920.

The sculpture was commissioned by the Suffrage Coalition and designed and created by Alan LeQuire. It was unveiled on 26 August, 2006 as part of a day of commemorations, which included a re-enactment of a suffrage march, with women in vintage clothes and replica sashes, and carrying replica banners. Martha Craig Daughtrey was the speaker at the unveiling; she was the first female judge on a Tennessee court of appeals and the first woman on the Tennessee Supreme Court.

The bronze sculpture depicts three women who were leading campaigners for women's suffrage: Elizabeth Avery Meriwether of Memphis, Lizzie Crozier French of Knoxville, and Anne Dallas Dudley of Nashville. The base of the sculpture features text on the campaign and a number of quotations from the campaigners, including the following by Harriot Eaton Stanton Blatch:

"All honor to women, the first disenfranchised class in history who unaided by any political party, won enfranchisement by its own effort alone, and achieved the victory without the shedding of a drop of human blood." 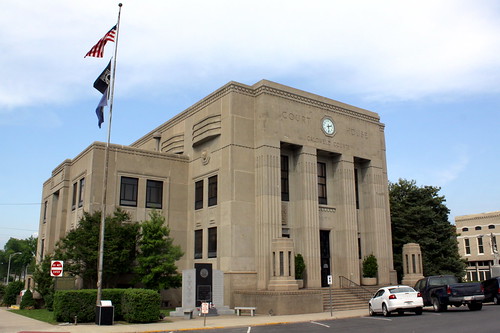 listed on the National Register of Historic Places as part of the Princeton Downtown Commercial District. The most distinct feature of this Art Deco courthouse completed in 1940 are the reliefs of U.S. Presidents, one of which is visible in this view if you look at the original size.
Posted by BrentKMoore at 7:30 AM No comments: 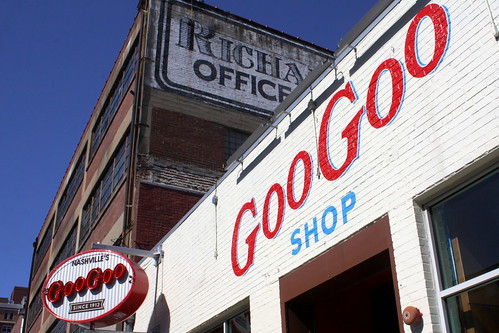 Located in downtown along 3rd Ave is a retail store for Nashville's most famous candy bar, the Goo Goo Cluster. The confection comes in three flavors, original, supreme and peanut butter, by the individual package or the crate-full. Plus they sell typical gift shop wares such as shirts, magnets, books, etc. The highlight of the store is a kitchen where they produce double-sized Goo Goos in flavors you can't get anywhere else. They were almost sold out on the day I was there, but for $7.99, you can get a jumbo in these flavors: Peanut Butter & Pretzel, the Howie, the Filbert, the Pink Cadillac & Coco Noir. 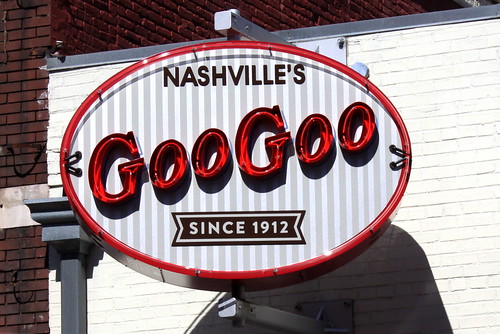 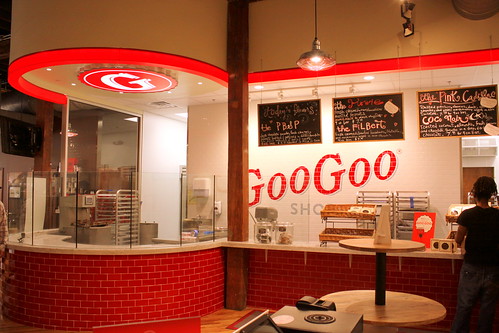 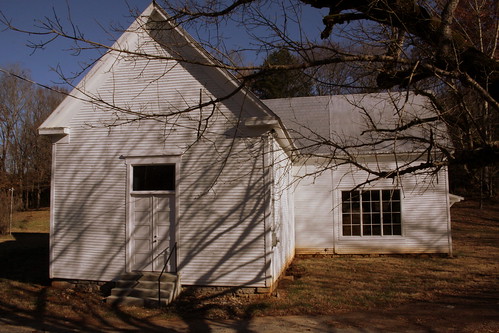 This school house in Raus was built in 1888. Now it serves as a community center. It was added to the National Register of Historic Places.

Raus is located along Smith Chapel road about 500 ft. from highway TN130. It is in Bedford County about a mile from Moore County.
Posted by BrentKMoore at 8:00 AM No comments: 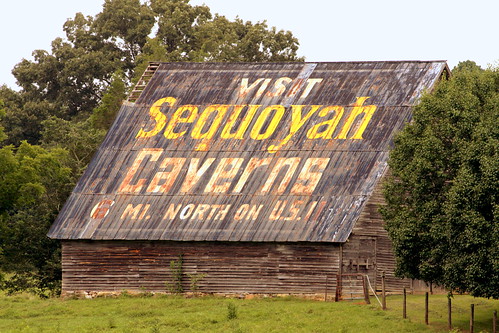 Sequoyah Caverns is a cave and now-closed tourist attraction in DeKalb County, AL. When the cave first opened commercially, they hired the famous Rock City barn painter Clark Byers to run the operation. I suppose barn painting was still a hobby of his as he painted several of these in the area. (By my count, there are 8 in and around the county.) The Barn seen here is located near the town of Valley Head, AL. Highway AL117 as it heads west out of town curves around a bend where this barn is visible. The last line mentions the barn is 6 miles away on US11. If you look closely you can see an older message where the paint is starting to show through. There's an old white border that goes all the way around the message and in cursive, the word SEE in the top right corner. Maybe the Sequoyah message changed over the year, or perhaps it used to be a Rock City barn before Sequoyah opened up in the 1960s.
Posted by BrentKMoore at 8:00 AM No comments: 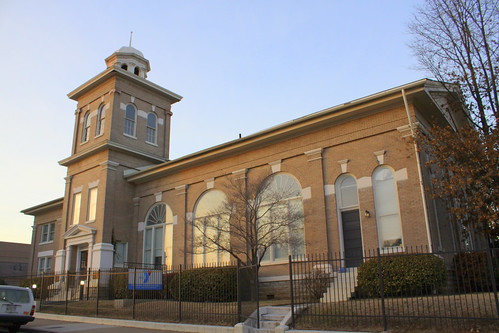 Now: YMCA East Nashville Y-CAP
This building is formerly the Fatherland Baptist Church and was listed on the National Register of Historic Places as part of the East Nashville Historic District with an address of 122 South 11th Street. Here is the text from the NRHP nominating form:

Two blocks away at 122 South 11th Street is Fatherland Baptist Church (photo #33, map #1). It also is somewhat Beaux Arts in style though less so than the previous two buildings. Built of beige brick on a stone foundation and trimmed with stone, the church is basically a gable-roofed rectangle. It is an unusual design, not closely resembled by any other church in Nashville. Brick pilasters with stone caps and bases ring the entire building creating a temple-front effect on the pedimented east end of the building. The pilasters articulate the facades into bays of equal width, three on the short end and seven on the longer sides. On the south side, at the third bay from the rear, facing Russell Street, is a square tower, one bay wide, rising to a full second story and topped by a rather small, domed, eight-sided belfry with Ionic pilasters framing each of its sides. The main entrance is in the base of this tower framed by a pair of Tuscan columns and a pediment. Sanctuary windows are arched, one to a bay, with narrower arched windows paired in each corner bay. To the rear of the entrance tower is a two-storied educational building under the same roof plane.
Posted by BrentKMoore at 3:32 PM No comments: 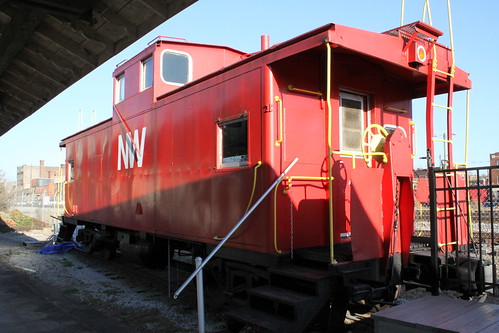 The Old Smoky Railway Museum is a collection of rolling stock outside the historic Southern depot in Knoxville, TN.
Posted by BrentKMoore at 8:00 AM No comments: 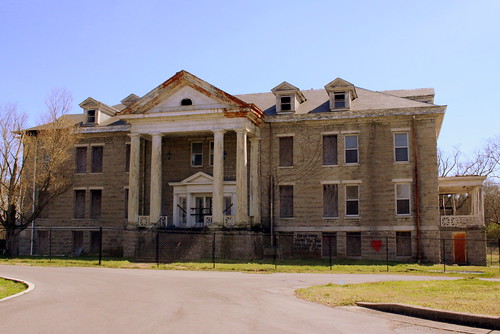 From the Nashville Scene in Dec. 2019:
The state controls the fate of some other endangered sites, such as The Home for Aged Masons (R.S. Gass Boulevard off Hart Lane in Inglewood), a three-story Colonial Revival-style building constructed in 1913-1915. It and the nearby Boys' School, built around 1915, are the only surviving buildings from a larger complex dating to the early 20th century. The Tennessee Masons provided the campus as a home for widows, orphans and the aged, according to Historic Nashville, which placed these properties on its list.

Designed by the Nashville architectural firm of Asmus & Norton, who designed the Cathedral of the Incarnation on West End, the columned limestone building is listed n the National Register of Historic Places. It sits now on an office-building campus that houses the Tennessee Bureau of Investigation and other state agencies. Purchased by the State of Tennessee in 1941 for use as a tuberculosis hospital, the property was vacated in the 1990s

From Wikipedia:
en.wikipedia.org/wiki/Home_for_Aged_Masons The Home for Aged Masons, formerly known as the Masonic Widows' and Orphans' Home and the Middle Tennessee Tuberculosis Hospital, is a historic building in Nashville, TN.

The land was given to the Grand Lodge of Tennessee Free and Accepted Masons by Jere Baxter, the founder of the Tennessee Central Railroad. The building was designed by Nashville architects Asmus and Norton in Colonial Revival style, and was completed in 1913–1915. It housed older Freemasons and families of lower means. It was co-founded by William H. Bumpas and Marcus B. Toney, who served as its founding president. Toney was a Confederate veteran, Klansman, and Edward Bushrod Stahlman's brother-in-law. Stahlman was one of the charter members.

The building was acquired by the state of Tennessee and repurposed as the Middle Tennessee Tuberculosis Hospital in 1941. It was used as offices for the Tennessee Department of Health in the 1970s and 1980s.

The property was unoccupied from 1999 to 2009, when the state of Tennessee suggested demolishing it to save money. However, by 2016 state officials were "attempting" to preserve it.

It has been listed on the National Register of Historic Places since November 19, 2008.
Posted by BrentKMoore at 8:00 AM No comments: 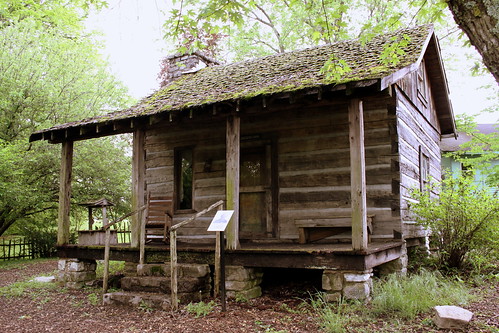 This log cabin is located in Stone Bridge Park in Fayetteville, TN. I don't have any info on this cabin other than the plaque dedicated to Celia Lancaster Oldham (1952-2011) in front of it.
Posted by BrentKMoore at 8:00 AM No comments: