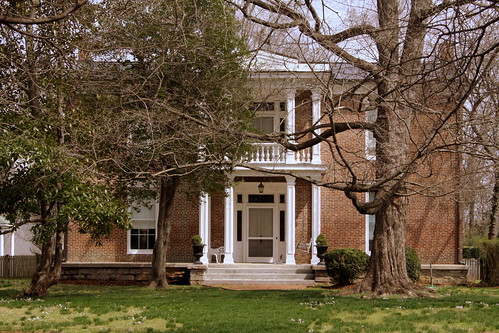 From Wikipedia:
en.wikipedia.org/wiki/Idler%27s_Retreat
Idler's Retreat, also known as the Dillon-Tucker-Cheney House, is a historic house in Smyrna, TN. It was built circa 1865 by J. D. Dillon. In 1882, it was purchased by John F. Tucker, and renamed Tucker Place. It was designed in the Greek Revival and Italianate architectural styles. By the 1940s, it was inherited by novelist Brainard Cheney's wife. The couple entertained other writers like Robert Penn Warren, Caroline Gordon, Flannery O'Connor and Allen Tate. The house was later inherited by Roy Neel, who served as the chief of staff to Vice President Al Gore. It has been listed on the National Register of Historic Places since May 19, 2004.

Other notes:
Original owner Joseph Dillon was a local attorney and Pro-Union legislator.
The home was briefly used as a USO headquarters.
Before the addition of Central Heat in 1957, the home was nicknamed "Cold Chimney's."
The name Idler's Retreat is based on a George Bernard Shaw quote, “A learned man is an idler who kills time by study.”