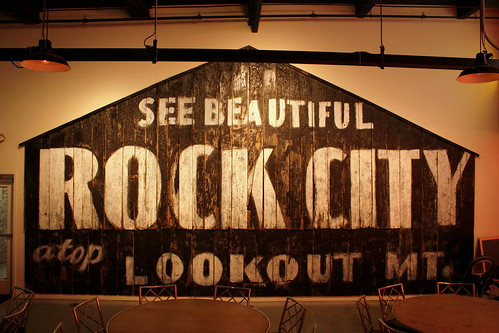 Only a small number of the barns remain which advertised Rock City, the famed tourist attraction atop Lookout Mountain. The painted part of the barn seen here was originally located along highway US31E/150 in Spencer County, KY. However, after a 2014 highway widening project meant the removal of this barn, it was preserved by the American Sign Museum in Cincinnati.

Here is a newspaper article of the barn being preserved with some interesting photos:
www.courier-journal.com/story/news/local/2014/10/24/rock-...

Somehow, I managed to drive right past this barn in 2010 and didn't see it.

I'm not sure if I should count this one or not, but for now I will.
This is now one of 92 different Rock City Barns I have photographed and uploaded to Flickr in my Rock City Barns set. People often ask me how I've found so many of them. I have drawn from many resources such as books and web sites and sometimes luck, but there's not really one "go to" place to find them all. Well, now on my website, I have tried to create a one stop source for the locations of all of the barns I've been to. On my Map of Rock City Barns page, I have plotted each barn on a Map.
Posted by BrentKMoore at 8:30 AM