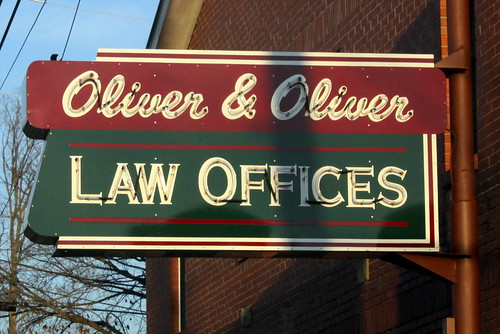 Seen along US25 in Berea
Posted by BrentKMoore at 8:00 AM No comments: 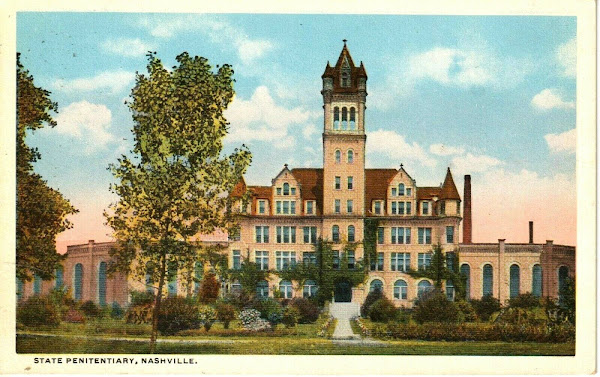 This view of the State Penitentiary was from the linen era of post cards, likely from the 1930s or 40s. What are you going to say on a post card like this? Wish you were here! 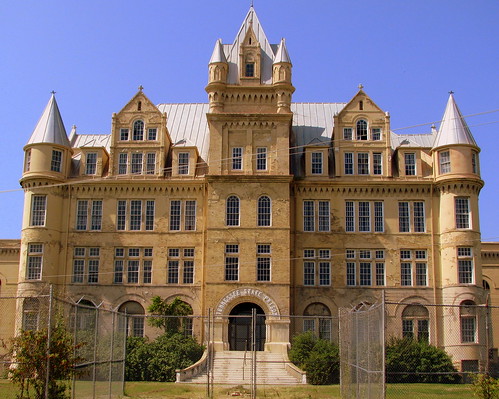 This interesting building was built in 1898 and was modeled after the fortress-like structure in Auburn, NY. The main building in the front and center is an administration building. The prison has 800 cells and was built for a cost of $500,000. Due to deterioration, it was closed in 1992 to coincide with the opeing of Riverbend prison.

Since it's closing, it's been a popular spot for films ranging from Ernest Goes to Jail to The Green Mile.

I've seen post cards of this place from the 1910s and 20s. It seems like an odd thing to make a post card for. What are you going to say? Wish you were here!

I've heard it's also a popular place for ghost tours. At the same time the interior is quite unsafe. I've heard reports of security keeping people from getting close to the building, bit nobody was on duty the day I was here. To the right of the prison is the Cumberland River and to the left and behind it is Briley Pkwy.

To see my other views of the outside of the prison, look here.
Posted by BrentKMoore at 4:46 PM No comments: 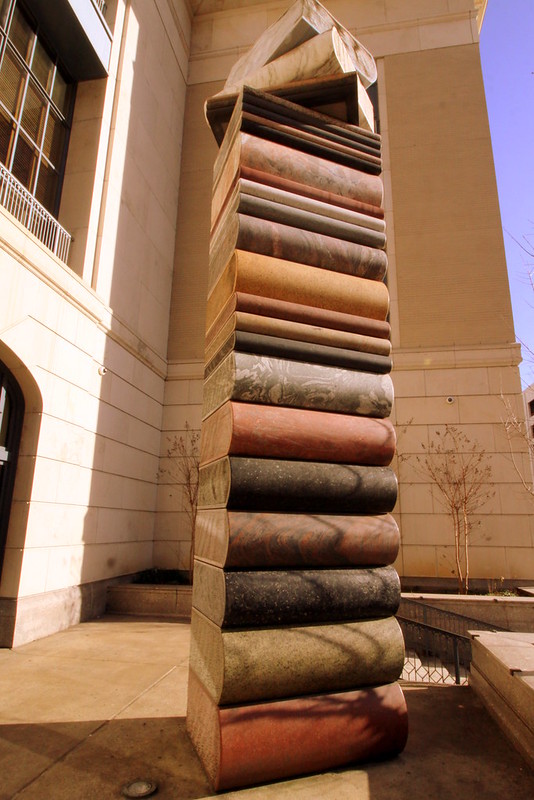 This 2001 sculpture of a tall stack of books named "La Storia della Terra" is in downtown Nashville. According to the plaque, it contains stones from five continents and was made by Kubach-Wilmsen, sculptors.
Posted by BrentKMoore at 8:30 AM No comments: 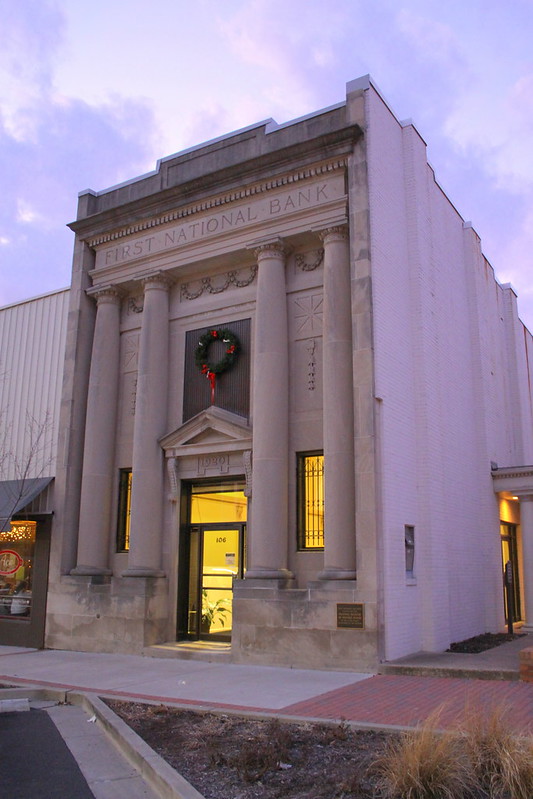 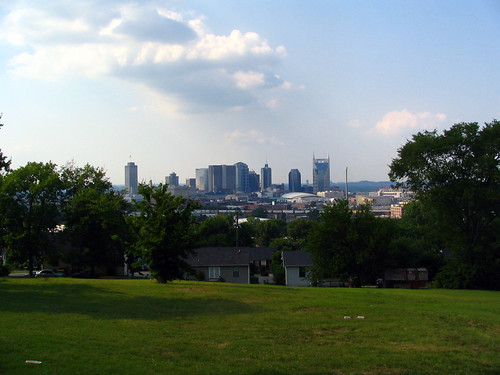 E.S. Rose Park in the Edgehill part of Nashville has a baseball field, and this view of the Nashville Skyline. Photo taken in 2005.
Posted by BrentKMoore at 8:00 AM No comments: 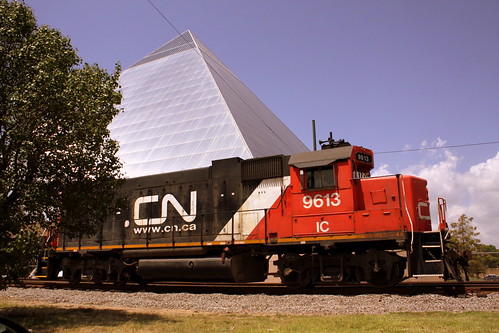 Before this picture taken in 2015, I had never photographed a CN train before, even though I had been around West Tennessee and the former IC mainline several times. So, imagine my joy when I get to Memphis and see this as soon as I get there. Canadian National #9613 is formerly Illinois Central #9613 It is an EMD-GP38-2 built in 1974.
Posted by BrentKMoore at 8:00 AM No comments:

Autumn Morning at the River Confluence 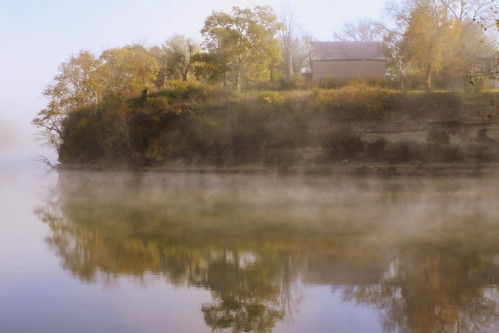 This scene is taken from Smith County, TN where Round Lick Creek meets the Cumberland River. At this spot near the small community of Rome was a historic ferry that crossed the Cumberland. I was here on an Autumn morning before all the morning fog had burned off.
Posted by BrentKMoore at 7:30 AM No comments: 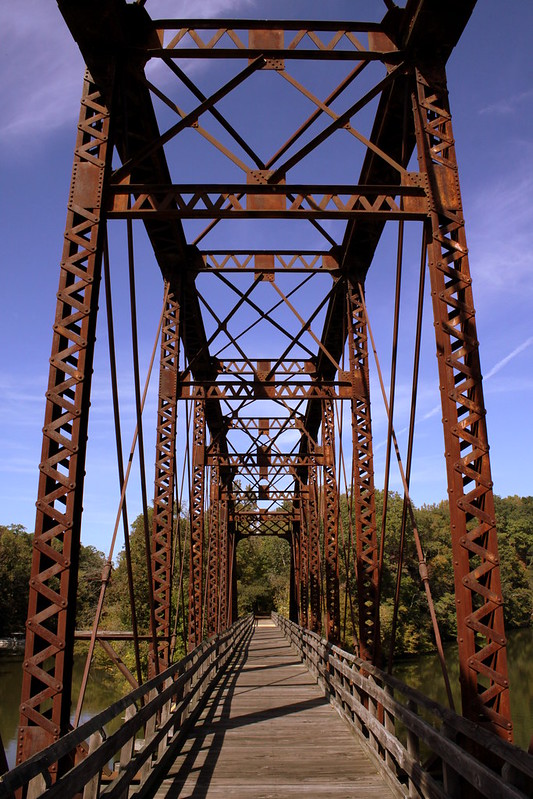 This bridge was originally built in 1901 by the Tennessee Central Railway as they extended their rail line from Nashville west to Clarksville. Around 1990, the tracks west of Ashland City were abandoned and soon many people wanted to convert the old railbed and this bridge to a pedestrian trail. With a partnership between the Rails-to-Trails Conservancy and the Cheatham County Parks Department, the Cumberland River Bicentennial Trail was built and it utilized the old bridge. (The trail parallels the Cumberland River but actually crosses Sycamore Creek.) The iron Parker through truss bridge with a length of 550 ft. was built by American Bridge Co. 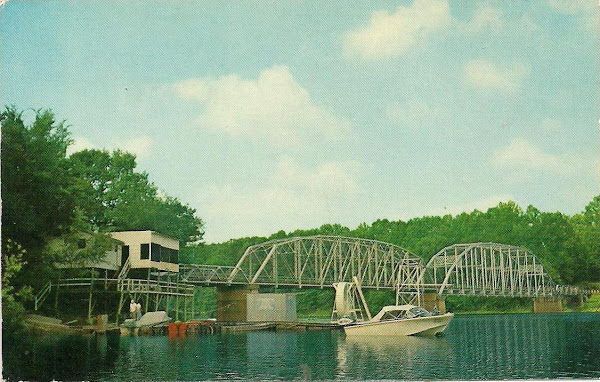 This post card from 1969 shows a portion on the Rock Island Resort near the Great Falls Dam. Of particular interest is the Collins River Bridge in the background. 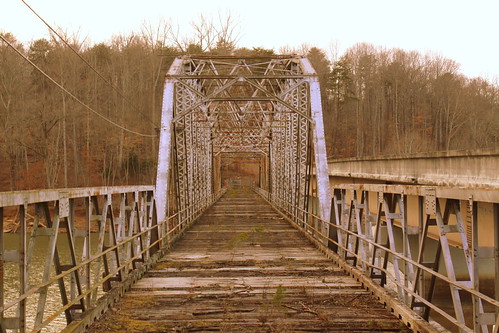 This bridge is located near the 1916 Great Falls Dam, a major power source in the area. In 1922, That dam was raised 35 feet and the bridge which had been located here had to be replaced to accomidate the higher water level. Consequently, the Nashville Bridge Company removed the existing truss bridge from this site in 1924 and erected a new bridge using the stored truss from the Hydes Ferry Bridge.

TVA maintained responsibility for this bridge from the 1930s when they took over the nearby dam until 1982 when the road became state highway TN287. In 1986, a new two-lane bridge was completed parallel to this one and TDOT converted this one into a pedestrian bridge. From there, ownership was transferred to the TN Department of Conservation so that the bridge would be part of a nature trail at Rock Island State Park. Today, the bridge is off limits as both sides are fenced off and the park is hoping to someday raise funds to refurbish the historic bridge for future pedestrian use.

Technical details of the bridge are found in the book "Tennessee's Survey Report for Historic Highway Bridges" where this is entry #112: "Top chords and end posts are channels with lacing, and diagonals and the bottom chords are paired rectilinear eyebars. Verticals are channels with lacing except hip verticals which are paired rectilinear eyerods. Counters are single rectilinear tie rods. The bottom chords are below the floor beams, a somewhat unusual arrangement. The other spans are a 200-foot pin-connected Parker through truss, two 75-foot riveted Warren pony trusses, and three 20-foot steel I-beam approaches. The bridge has a curb-to-curb width of 15 feet and an out-to-out width of 17 feet. The substructure is concrete. Composition of the members of the 1924 trusses is typical. The Parker’s top chords and end posts are channels with lacing. Bottom chords, diagonals and counters are angles with battens. Verticals are paired angles with lacing. The Warrens’ top chords are channels, and the end posts are channels with battens. Bottom chords, verticals, and diagonals are angles with battens."
Posted by BrentKMoore at 4:41 PM No comments: 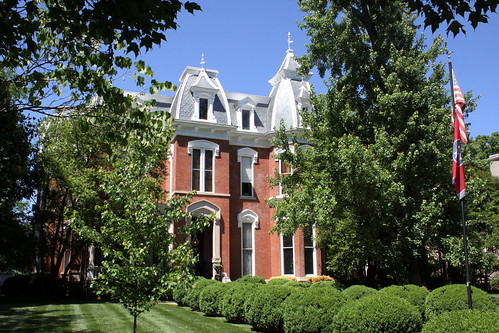 This house is on the National Register of Historic Places as a contributing property to the East Main Street Historic District in Murfreesboro, TN. Here is a description of this house from the brochure entitled "Explore Historic Murfreesboro - A Walking Tour"

511 East Main Street
The Second Empire style is characterized by the Mansard roof, central tower, two-story bay windows, and metal cresting along the roof line. Built to reflect a combination of wealth and fashion, the Collier-Crichlow House was designed by Nashville architect W. C. Smith and built by local carpenter H. C. Jackson. The first owner, Ingram Collier, was a successful businessman and the mayor of Murfreesboro in 1872 and 1873. The Collier-Crichlow House is listed in the National Register of Historic Places independently in addition to being part of the historic district.
Posted by BrentKMoore at 8:00 AM No comments: 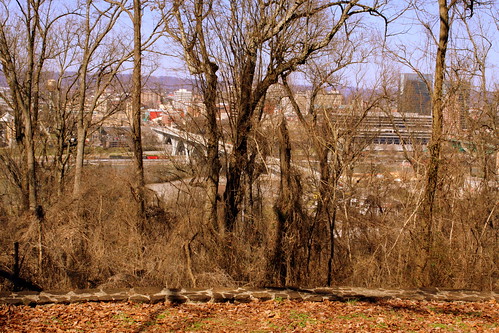 While it's not a great view, it's still an interesting view - and you can't see it at all most of the year. Fort Dickerson Park located south of downtown is a Civil War Battlefield atop a tall hill and includes this scenic overlook.
Posted by BrentKMoore at 8:00 AM No comments: 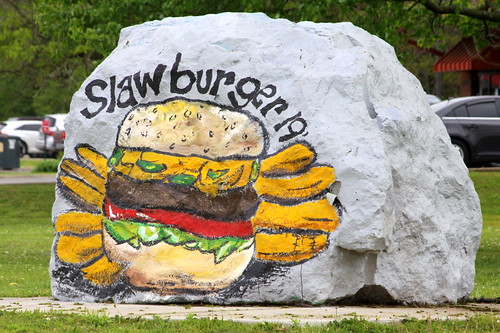 Starting in 2015, the third Saturday in April brings the yearly Slawburger Festival to the Fayetteville, TN town square. (With Covid, I'm not sure if it's on this year.) A Slawburger is a hamburger where the patty is topped by a mustard-based cole slaw. This Slawburger is only prepared by a few local restaurants like Honey's Restaurant, Ken's Fast Foods and Bill's Cafe. This big rock is in front of Lincoln County High School along highway US231/431. The painted slawburger must not be permanent as there is something else painted here on Google street view.
Posted by BrentKMoore at 8:00 AM No comments: 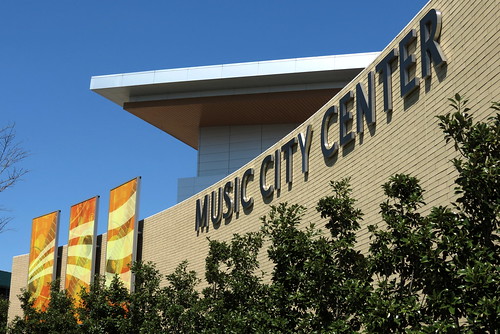 The Music City Center is Nashville's new downtown convention center complex which opened in May 2013. The building covers an area of 1,200,000 sqft. at a cost of $623 million. This is the corner of the building that faces the roundabout at 8th Ave @ Korean Veterans Blvd.
Posted by BrentKMoore at 8:00 AM No comments: 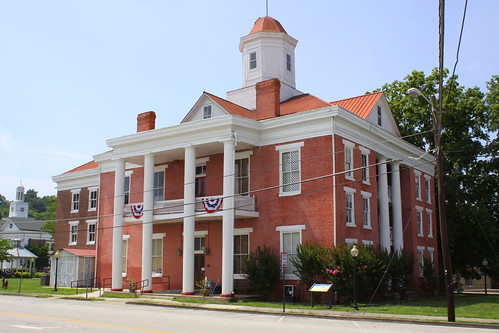 Built in 1854, its one of 6 courthouses in TN built before the civil war that still stands today. Used as a Courthouse until 1974 when the new one was built. It was used as a civil war hospital and graffiti written by civil war soldiers can still be seen on the inside. The state of Tennessee placed an Obelisk in the front yard commemorating this as the location of the state capital (for one day in 1807). Today, the building is used as a museum. 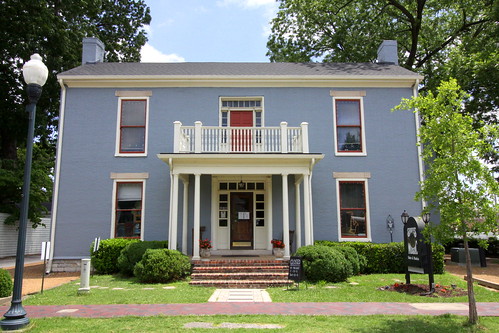 This house is on the Historic Franklin Walking Tour. With its close location to the Franklin town square, this is now the home of Shuff's Music Sales & Studios.
Posted by BrentKMoore at 8:00 AM No comments: 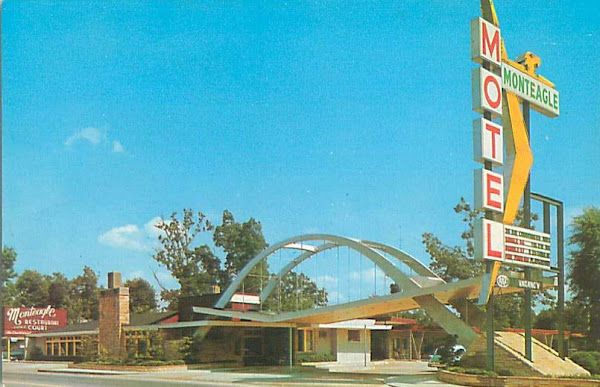 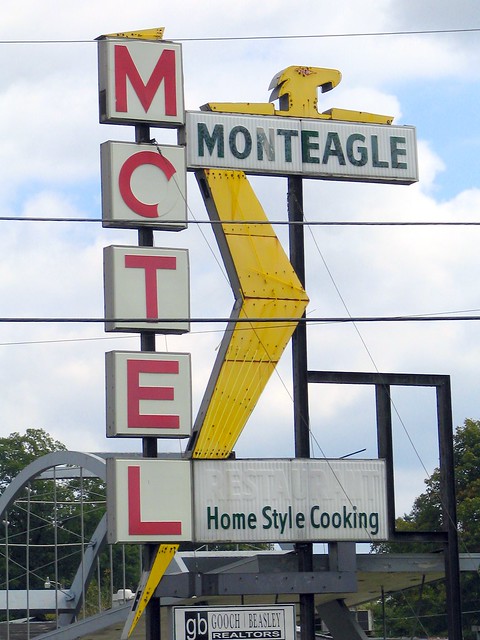 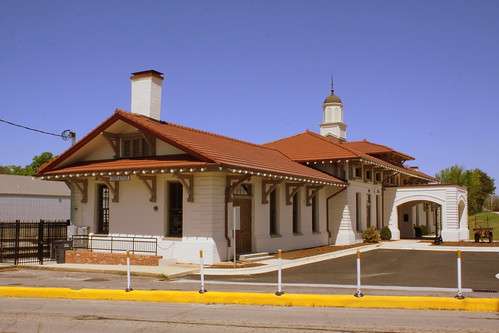 From Wikipedia:
The Southern Railway Depot is a historic building in Decatur, Alabama. The depot was built in 1904–05 along the Southern Railway line. Decatur had become a transportation hub of North Alabama by the 1870s, with its connections to the Tennessee River, the east-west Tuscumbia, Courtland and Decatur Railroad (later operated by the Memphis and Charleston Railroad and the Southern Railway), and the north-south Louisville and Nashville Railroad. It functioned as a passenger station until 1979, when Amtrak cancelled its Floridian service. The station is built of brick painted white, with quoins on the corners. The building has a rectangular central section with narrower wings stretching along the tracks. The central section has a hipped roof, while the wings have gable roofs; both have deep eaves with decorative brackets. The main entrance is covered by a porte-cochère with arched openings. The depot was listed on the National Register of Historic Places in 1980.

Here is a view from the pedestrian bridge which crosses the tracks: 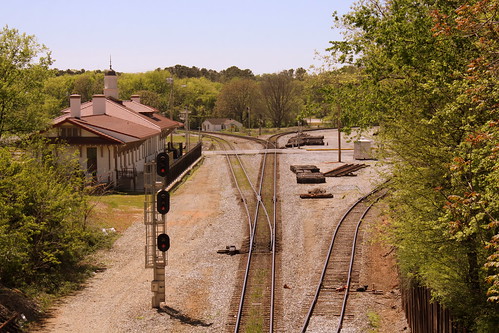 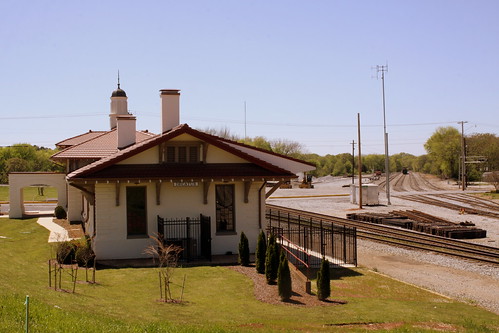 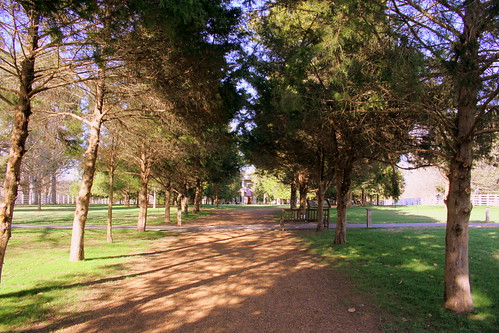 Here is the historic entrance path to the Hermitage mansion. The 1998 Nashville tornado uprooted many of the trees which lined this, so this is what the new trees look like 20 years later.
Posted by BrentKMoore at 8:30 AM No comments: 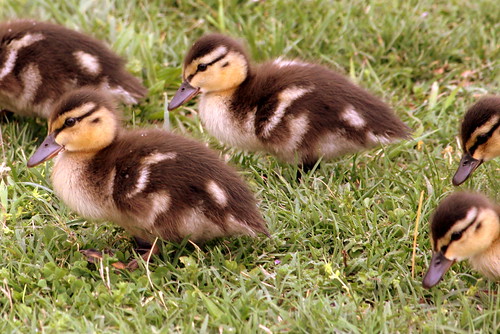 A family of mallard ducks were seen at Gateway Island city park in Murfreesboro.
Posted by BrentKMoore at 3:13 PM No comments: 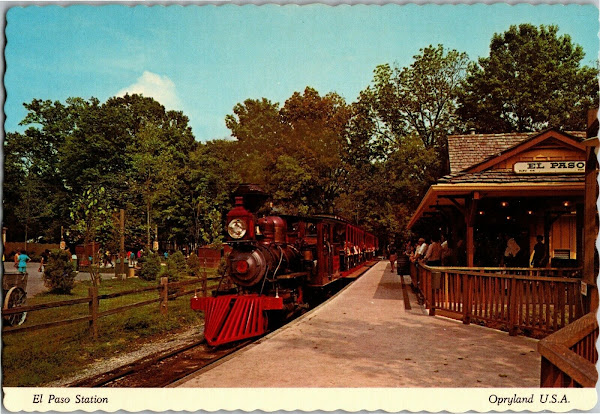 Count me among those who wish we still had Opryland theme park instead of a large mall. As a child, the train was my favorite ride as you could get a tour of the whole park. The two stations were El Paso and Grinders Switch. I'm not sure which locomotive is pictured here, but they did operate a real steam train which was named Beatrice, as well as a diesel made to look like a steam train.
Posted by BrentKMoore at 7:30 AM No comments: