In the news: Nathan Bedford Forrest statue removed in Memphis 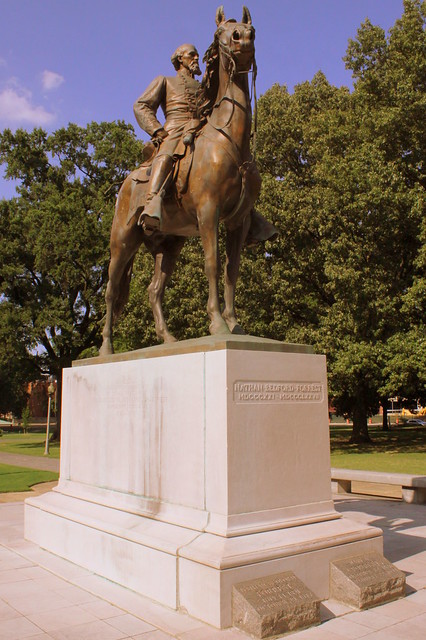 The City of Memphis has been trying to remove this statue for a while. They have been looking for a legal solution, so they sold Health Springs Park to a private company, then the new private owners removed the Forrest statue.

Here is my write-up from 2015 when the statue removal talks became prominent:

Disclaimer: Recently, everything that is associated with Nathan Bedford Forrest or the Confederacy in general has become controversial. I take no sides in the matter, but I am documenting this for the historical and newsworthy nature.

By now, most people know that Nathan Bedford Forrest was a general in the Civil War for the Confederate Army. Then after the war, he became a leader for the Klan. Forrest stated a desire to be buried among his troops. Upon his death in 1877, he was buried at Elmwood Cemetery in Memphis.

At the turn of the century, the Sons of Confederate Veterans wanted a more prominent tribute to General Forrest. In 1905, the bodies of Forrest and his wife Mary were re-interred at this park. Atop the graves was this monument and equestrian statue by the E. Gruet Jeune Foundry in Paris. The park was named Forrest Park. Today, the site is on the National Register of Historic Places.

The existence of this park and statue has not set well with several leaders of the Memphis community. In 2013, this park along with Confederate Park and Jefferson Davis Park were renamed. Today, this park is known as Health Sciences Park after the UT campus next door.

With the recent horrific Charleston Church shootings, there has been a renewed intensity in removing public tributes to Forrest and other Confederate leaders. On July 7, 2015, the Memphis City Council voted unanimously to exhume the Forrest family and move them and the statue to another location. (They probably would be moved back to Elmwood Cemetery or the highest bodder.)

The legal maneuvering doesn't stop there. After the city finalizes their removal, then the city has to officially file a lawsuit in probate court. At that point, the Forrest descendants will also appear in court, and they will fight to keep everything the way it is.

A couple of other notes. There is a rumor that the city really has a desire to expand the UT Health Sciences Campus onto this park ground and perhaps that is their real motivation. Also someone had spray painted the other side with [Edited] the KKK; while the graffiti was cleaned, it was still readable. If this does get moved, I am sure I will photograph it at the new location as well.
Posted by BrentKMoore at 8:00 AM No comments: