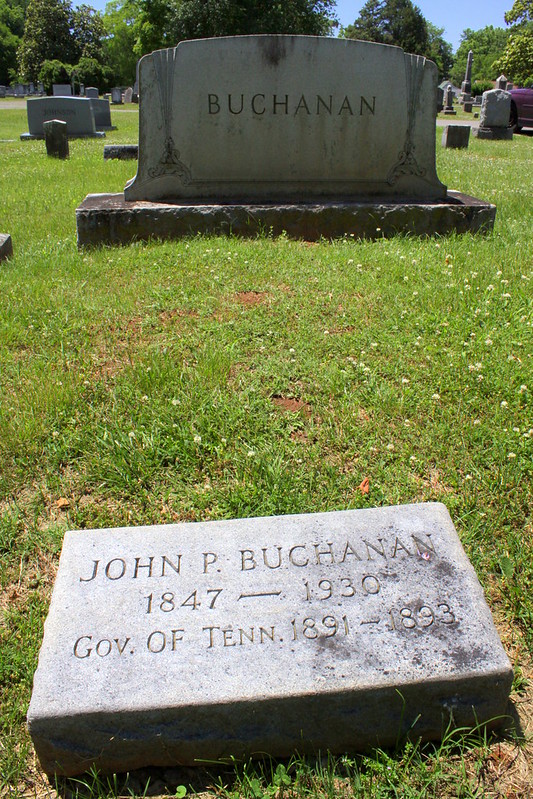 John Price Buchanan was the 23rd Governor of Tennessee (or 28th if you count duplicates). During his administration (1891-93) the secondary school system was established and pensions were granted to Confederate soldiers. His term was marred by the Coal Creek War.

Buchanan is so far the only Governor to come from Rutherford County. A public school is named after him along US41 on the south side of the county, about three miles from where he lived. He is buried in Murfreesboro's Evergreen Cemetery.
Posted by BrentKMoore at 7:30 AM No comments: 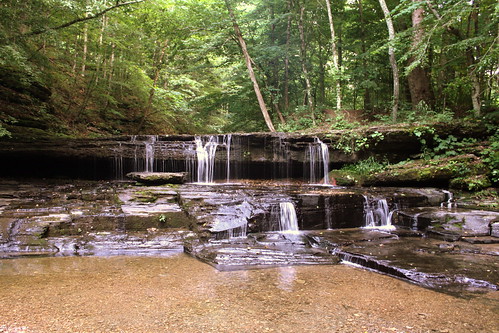 Union Camp Falls is a small waterfall in a beautiful setting in Macon County, TN. An ankle-deep stream by the name Long Fork tumbles about 8 feet over the rocks here. The area got it's name because apparently some union soldiers camped here during the Civil War.

To get here, take highway 262 (also known as Union Camp Rd.) southeast away from Lafayette. After a few miles, on your left will be a road that slopes down from the highway for Union Missionary Baptist Church. Drive down this road past the church for a few hundred feet and you'll see a spot where a very small stream flows over the road. Before you cross that, to your right will be a place for a car or two to pull over.

UPDATE: Someone left this comment on my blog about this waterfall: Keep off private property .. Please remove this!!!

Here is my response: Perhaps this is private property, but if so, you have a bigger problem than me. The Tennessee Department of Tourism listed this as stop #43 on the Ring of Fire Byway as part of their Tennessee Trails and Byways program. See it here: tntrailsandbyways.com/trail/11/ring-of-fire/?p=3
Posted by BrentKMoore at 7:30 AM No comments: 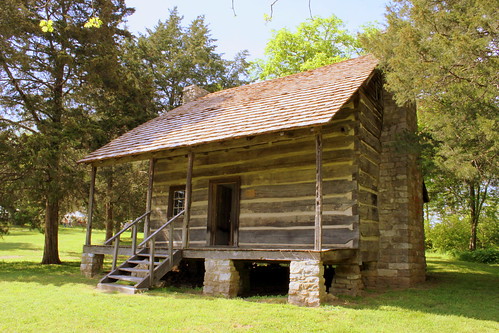 The 1790's Parker family cabin is located now at Bledsoe's Fort Historical Park near Castalian Springs. Originally it was located in Rogana, about 4 miles to the north but was dismantled and relocated in the park. Parker married Mary Ramsey Bledsoe— the widow of Anthony Bledsoe— in the 1790s and commanded the fort at Greenfield.
Posted by BrentKMoore at 7:30 AM No comments: 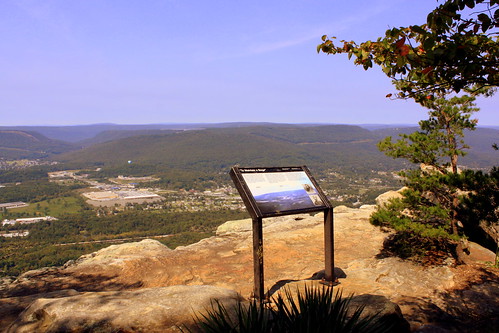 Sunset Rock is a stone formation on the west side of Lookout Mountain (Hence, the side where the sun sets) near Chattanooga, TN. The marker in the picture discusses the Civil War significance, and how generals here could overlook fighting in the valley below. The strait rock face also makes this a popular spot for rock climbing and rappelling.

To get here, there a tiny parking area atop lookout mountain, and then a short (.2 mi.) but steep descent to the bluff. Just as many places in nature, there's nothing to keep you from going over the cliff, so caution should be used.
Posted by BrentKMoore at 7:30 AM No comments:

This highway was completed in the early 1920s and was the most difficult stretch of the early North-South cross-county road, the Dixie Highway. Yet, it also became one of the most scenic stretches of the entire route.

In the commentary, I discuss how the road got its name, why it was difficult to build the road, how the Dixie Highway was rerouted and points of interest along the route.

And finally, here is my website:
http://seemidtn.com/
Posted by BrentKMoore at 7:30 AM No comments: 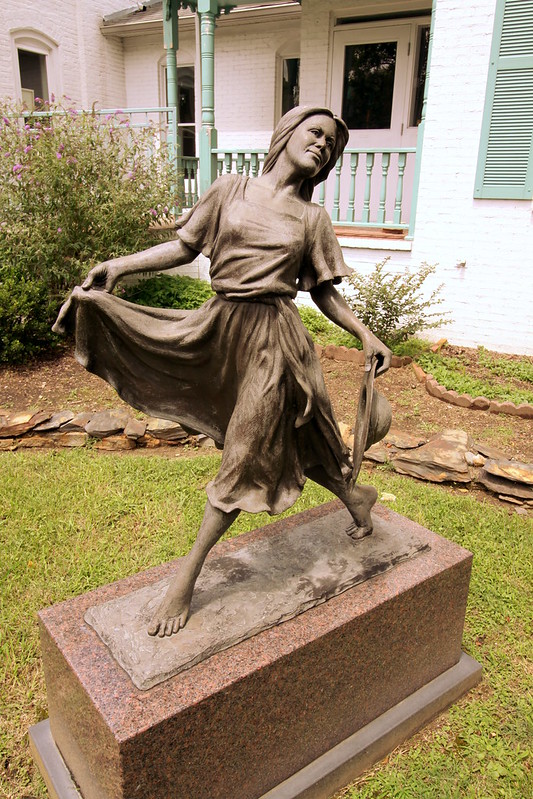 A bronze sculpture was permanently installed on the Tullahoma Fine Arts Center lawn in 1999. Entitled, Summer Song, it was created by Bell Buckle artist Russell Faxon.
Posted by BrentKMoore at 7:30 AM No comments: 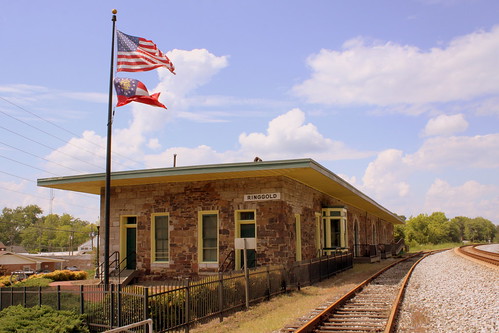 Back in 1849, Ringgold was the largest city in the area, even larger than nearby Chattanooga. The depot is made of stone which was common in the area at the time.

In 1862, the Ringgold Depot was one of the places to be a part of the Civil War's famous Great Locomotive Chase. Travelling north along the Western and Atlantic tracks, Andrew's Raiders would abandon The General steam locomotive about two miles north of here.

The depot is situated on a bit of an incline from the road below. The main road through town, which used to be the Dixie Highway and is now US41 runs between this vantage point and the station. The road passes under the tracks. The main part of town is to the left.

Today, the building has been restored and the town of Ringgold uses it as a community meeting hall. Originally W&A, the tracks later became part of NCStL and are now CSX. The depot is also listed on the National Register of Historic Places. 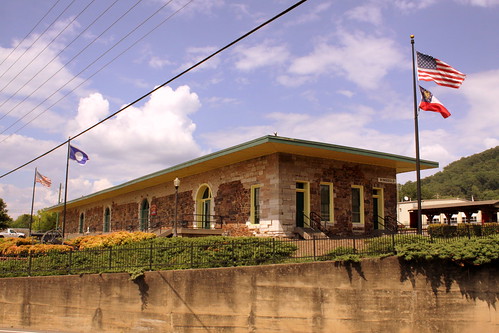 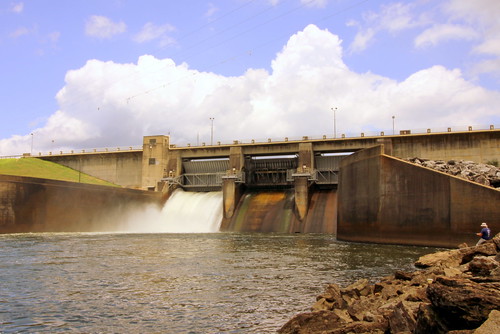 The Elk River Dam is part of the Arnold Engineering Development Center near Tullahoma in Franklin County, TN. The United States Air Force constructed the Elk River Dam in 1952 creating Woods Reservoir as a source of cooling water for processes at the AEDC.

Getting here was a little tricky as the area is no longer maintained and the road here is closed. from Highway 279, if you take Elk River Dam Rd. to a gravel parking lot, it's a 1/4 mile walk to the bottom. Don't confuse this with the Tims Ford Dam also on the Elk River but on the other side of Winchester.
Posted by BrentKMoore at 7:30 AM No comments: 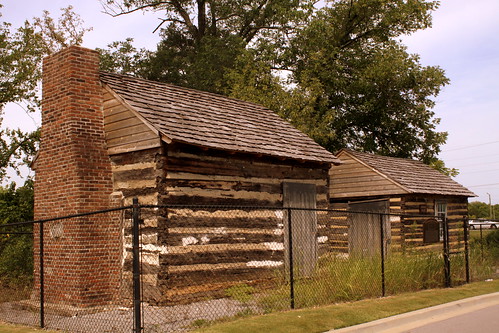 For Nashville preservationists, there may not be a subject in recent memory as sore the demise of Evergreen Place.

Originally, the property belonged to Thomas Craighead, a minister who founded Davidson Academy. Here, he build a log cabin which was eventually expanded to become a wood frame and brick Tennessee vernacular farmhouse. The property was sold a couple of times before the Civil War, but then it was inhabited by the same family for 125 years.

When I was born, Evergreen Place was the oldest home in Nashville. In 1980, the widow of country music singer Jim Reeves purchased the property and operated a museum in him honor. The home was added to the National Register of Historic Places.

After the museum closed, the home remained vacant for 15 years. All the while, people clamored for somebody to buy it and fix it up. That never happened.

Instead, a developer bought the property because it was at a prime location along Gallatin Pike (US31E). Knowing the old home was about to be turned into retail space, preservationists complained that people can't just come in and tear down history. The developers countered that nobody had stepped in for over a decade, so they might as well turn the area into something useful. The preservationists sued to prevent the tear-down, but the developers got tired of waiting and they tore it down anyway.

Today, the location is a prominent home improvement store, albeit one that a few bitter locals will never visit. Behind a new bank, two log buildings remain and one is labelled as a carriage house. To keep people out, the new owners have put a chain-link fence around the pair - because it would be bad if someone damaged a piece of history! Apparently, it's too much trouble to take care of the tall grass here. Before you know it, someone is going to call this an eyesore and there will be plans to turn this space into a hot dog stand. 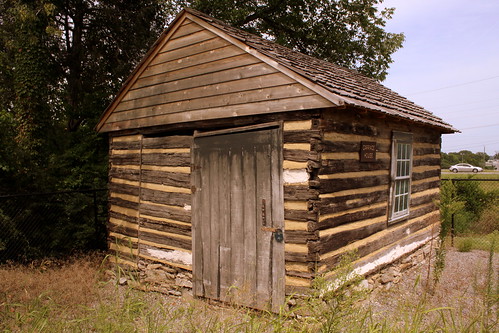 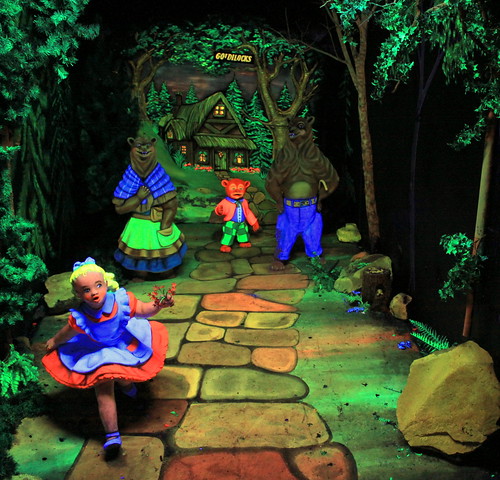 After spending some time trying to see seven states and various unusual rock formations, visitors to Rock City finish their visit along the Enchanted Trail by enjoying the sights of Fairyland Cavern.

When Fairyland Caverns first opened, most of the scenes consisted of their gnome collection and related decor fitting a fairy tale theme, all moved into a new section of the park that needed a purpose. Then in the late 40s, Rock City hired Atlanta artist Jessie Sanders to create the glow-in-the-dark scenes from popular fairy tales and these are the scenes that still exist today.

The first thing Mrs. Sanders crafted was a deer that stands next to Snow White. From there, she created individual displays for different tales. Other than the first two scenes (which depict a mother reading bedtime stories to the children and then the children asleep with "Dream Faries" flittering about) she was given free reign to create the scenes as inspiration struck. As the figures were cast from her Atlanta studio, they would be shipped to Rock City and installed after another artist, Marcus Lilly, would paint the backdrops. Jessie's husband Charles also helped create many of the props that are seen today.

After Jessie Sanders spent about a decade creating all of the vistas along the main hallway, she envisioned her most elaborate display in 1958. Mother Goose's Village was to be a large room with a miniature mountain, adorned by a castle, and many fairy tale characters seemlessly placed together to save the attraction's best for last. After six years of construction, the fantastic finale was opened to the public in May, 1964 delighting young and old since.

On my website, I have created a gallery entitled "A Tour of Rock City" where I not only have tried to photograph each individual display in Fairyland Caverns and much of Mother Goose's Village, but all the other wondrous scenes at the beloved tourist attraction. seemidtn.com/gallery/index.php?album=chattanooga%2Frock-city
Posted by BrentKMoore at 7:30 AM No comments: 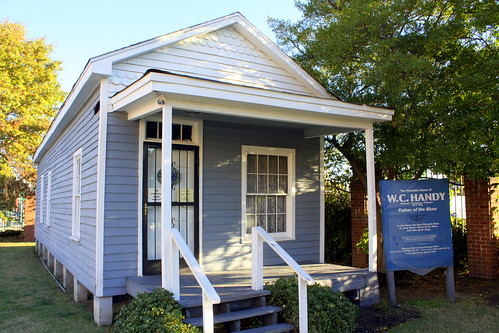 According to the sign:
The Memphis Home of W.C. Handy. Musician - Composer - Publisher. 1873-1958. Father of the Blues
In this house was born Memphis Blues, St. Louis Blues, Beale Street Blues and other great songs.
The house was moved here from 659 Janette Street in 1983 and restored by the Blues Foundation.
Museum operated by Heritage Tours.

The home and museum isn't directly on Beale St. Instead there is a sign and a gate on Beale inviting people back to see it.

Would you like to see more photos from Beale street? Check out the Beale Street gallery
Posted by BrentKMoore at 7:30 AM No comments: 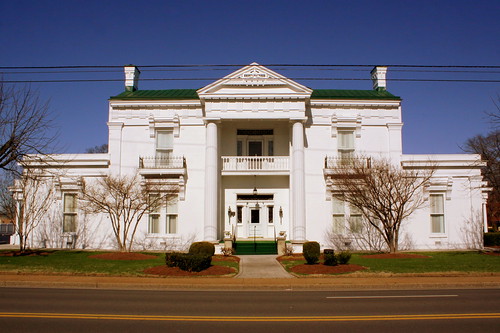 The Robert L Caruthers house at 241 W. Main St. (US70) in Lebanon is stop #2 on the Historic Lebanon Driving tour. Here is the text from that brochure:

This fine home was built in 1828 by Henry Reiff for Robert Looney Caruthers. Reiff was also the builder of the Hermitage in 1819. Caruthers (1800-1882) was a successful Lebanon lawyer in 1827 when he was appointed 6th district Attorney General by Governor Sam Houston. His political career included election to the Tennessee House of Representatives, 1835, United States House of Representatives, 1841-43, and appointment to the Tennessee Supreme Court, 1852, replacing Judge Nathan Green Sr.

Caruthers was elected governor of Tennessee in 1863 but did not take office as Federal troops occupied Nashville preventing the General Assembly from convening. He was a founder of Cumberland University, elected President of its first Board of Trustees, 1842, and served in this office until his death. Along with his brother Abraham, he co-founded Cumberland’s law school in 1847, and served as professor of law from 1868 until 1882. Before he was elected Governor in 1863, Caruthers accepted the nomination in a speech delivered from the home’s balcony.

The home’s elegant curvilinear staircase is a feature also seen at Andrew Jackson’s Hermitage, as well as Tulip Grove, both of which were also constructed by the Caruthers home builders. The federal style home, updated with Eastlake features in the 1880s, is the earliest surviving brick residence in the city.

For many decades, the home has been owned by Ligon & Bobo Funeral Home.
Posted by BrentKMoore at 7:30 AM No comments: 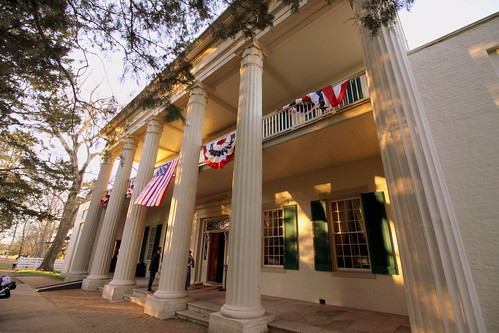