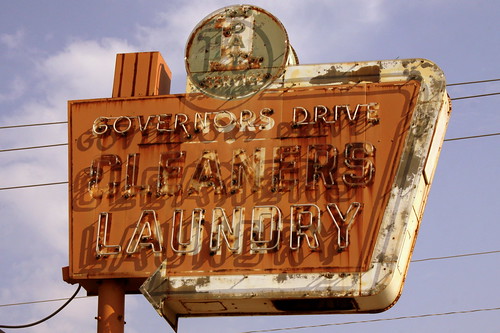 Laundry - 1 Day service
Posted by BrentKMoore at 7:30 AM No comments: 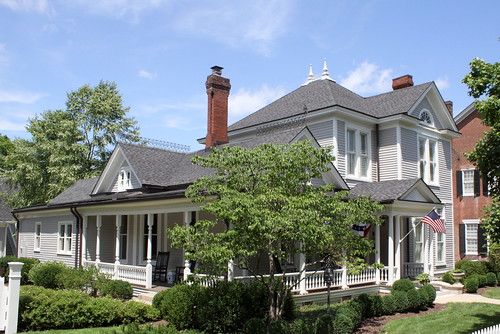 On the Franklin walking tour, the sign lists this home dating to 1898.
Posted by BrentKMoore at 7:30 AM No comments: 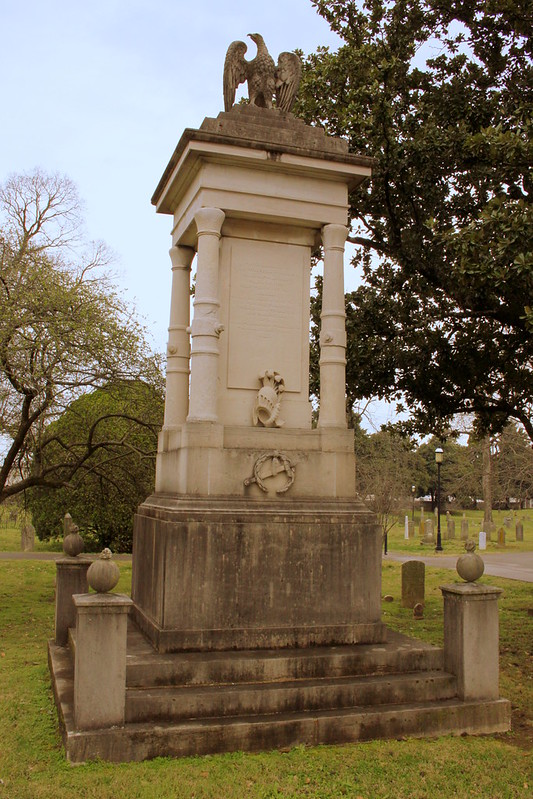 William Carroll (March 3, 1788 – March 22, 1844) was an American politician who served as Governor of Tennessee twice, from 1821 to 1827 and again from 1829 to 1835. He held the office longer than any other person, including the state's only other six-term governor, John Sevier. He is considered one of the state's most popular political figures of the 1820s, and is credited with initiating numerous legal and tax reforms.

Gov. Carroll is buried at Nashville's City Cemetery. About five minutes after I took this photo, I met a descendant of Gov. Carroll. This gentleman happens to be on the board of directors for the cemetery. I guess I had the look of someone really interested in the history as he offered me a personal tour of the cemetery.

A few years ago, an associate challenged me to find all of the Tennessee Governor's burial sites. This is #14 in my quest, so I am finally taking it seriously. My list: SWT) William Blount 1) John Sevier 3) Willie Blount 5) William Carroll 9) James K Polk 13) William Trousdale 14) William B. Campbell 15) Andrew Johnson 17) William G. Brownlow 22) Alvin Hawkins 23) William B Bate 25) John P. Buchanan 35) Austin Peay 36) Henry Horton 44) Ray Blanton.
See all of them here.
Posted by BrentKMoore at 7:30 AM No comments: 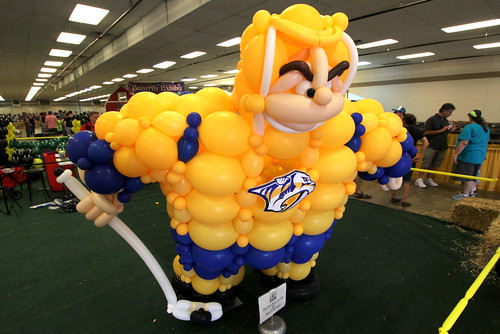 One of the highlights of the 2017 Tennessee State Fair is Sam the Balloon Man. His featured balloon art was this 8 foot tall Nashville Predator. He is even able to get inside this and bounce around.

Sam Cremeens also made headlines that year with a similar balloon for the 2017 Stanley Cup Playoffs:
www.tennessean.com/story/sports/nhl/predators/2017/06/05/...
Posted by BrentKMoore at 7:30 AM No comments: 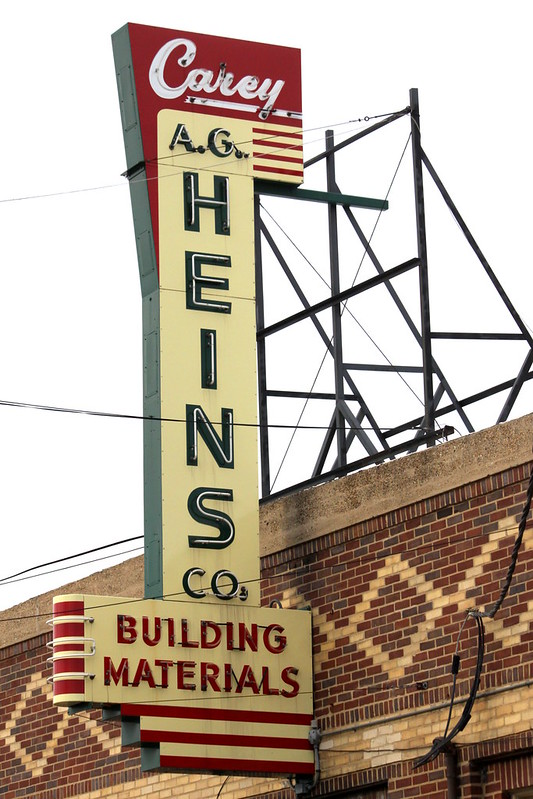 The A. G. Heins Co. is a Hardware Store in Knoxville. The carried products from the Phillip Carey Manufacturing Co., hence the Carey on the sign. You can read a brief history of their company here:
www.agheins.com/
Posted by BrentKMoore at 7:30 AM No comments: 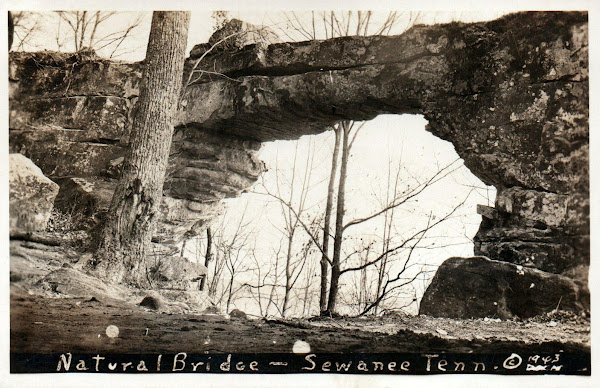 From Wikipedia:
Sewanee Natural Bridge in Franklin County, Tennessee, is a 25 feet (8 m) high natural sandstone arch with a span of 50 feet (15 m). It is essentially a giant sinkhole partially eroded to form a large stone bridge. A wet weather spring located behind the bridge in a rock cave probably contributed to the erosion forming the arch. It is called the Sewanee Natural Bridge as it was once owned by the University of the South in Sewanee, Tennessee. It is a 3 acre (12,000 m²) designated state natural area.

Today, the Area is considered part of the South Cumberland State Park. You can't get to the bottom if you are afraid of heights as you have to walk over the bridge, which is about 3 ft. wide, to get to the other side where you can scale down it. To get here, you'd follow the signs off highway TN56. Here's a picture from 2010: 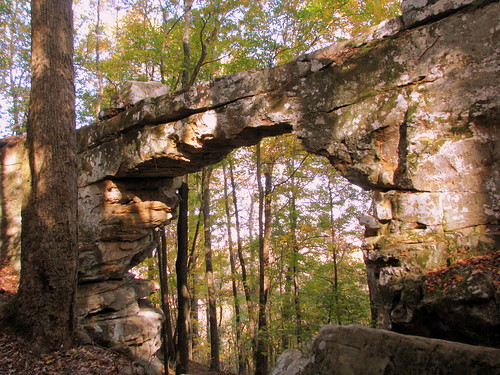 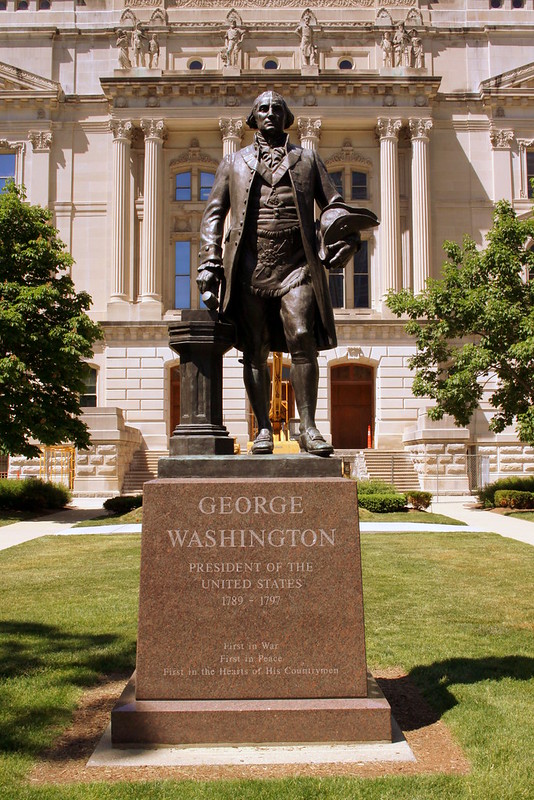 The statue depicts Washington dressed in breeches with an apron and medallion decorated with Masonic symbols. Washington holds a tri-cornered hat in the crook of his proper left arm, and a gavel in his proper right hand. He wears an open overcoat with buttons and has a short podium to his proper right. Washington's attire depicts the first President as he may have looked when he laid the cornerstone for the U.S. Capitol in Washington, D.C. The sculpture is mounted upon a stepped, inscribed granite base.

The Statehouse's version of De Lue's bronze statue was a gift of the Grand Lodge of Free and Accepted Masons of Indiana, dedicated May 19, 1987. A Smithsonian's Save Outdoor Sculpture survey completed in October 1992 noted the condition as 'well-maintained'.
Posted by BrentKMoore at 8:00 AM No comments: 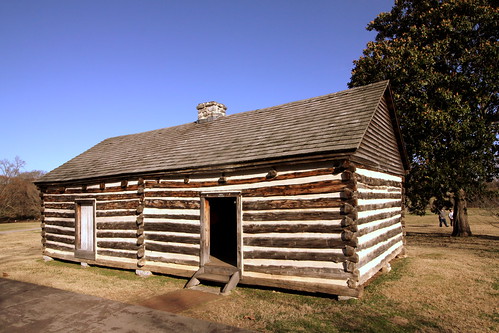 This double pen log cabin is an original slave cabin preserved on the grounds of Andrew Jackson's Hermitage in Nashville. Studies of the cabin show it may be as old as 1841. It is called Alfred's Cabin as former slave Alfred Jackson as a free man lived here until his death in 1901.
Posted by BrentKMoore at 7:30 AM No comments:

1961 Corvette - Franklin on the Fourth 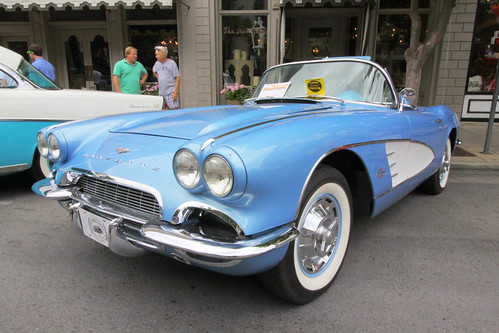 This 1961 Corvette was one of several classic cars on display along Main Street for the Franklin on the Fourth celebration in 2016.
Posted by BrentKMoore at 7:30 AM No comments: 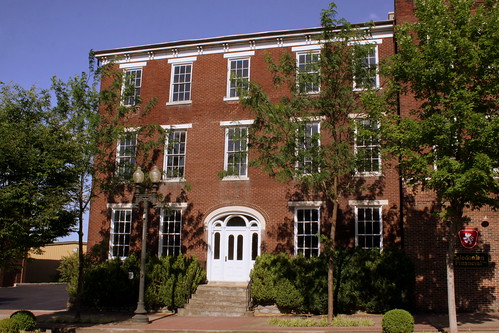 The Nelson House, also known as the Columbia House Hotel was built in 1828 with Pleasant Nelson as the proprietor. For many years, it was the area's premier hotel including stays by President Andrew Jackson and future President Andrew Johnson. During the Civil War, Confederate Lt. Andrew Wills Gould died here after a clash with Nathan Bedford Forrest. After an ambush and defeat, Forrest held Gould responsible for the defeat. When they met at the Masonic Hall down the road, Gould shot Forrest, who stabbed Gould. Forrest quickly recovered but Gould died at the hotel after a massive infection.
Posted by BrentKMoore at 7:30 AM No comments: 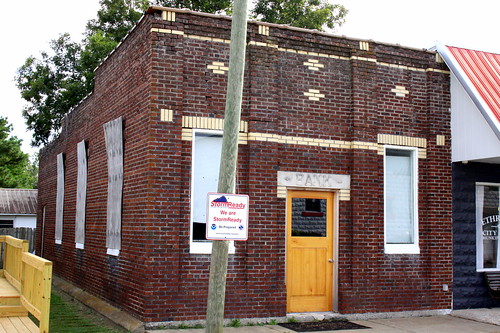 This old bank building in the small Lawrence County town was added to the National Register of Historic Places in Nov. 2017. Here is the description from the Tennessee Historic Commission:

The one-story brick building in the heart of Ethridge was built in 1927 after an earlier bank building burned. Many banks in the early 20th century were designed in the Classical Revival style, which was thought to convey security and stability to a community. The restrained detailing, seen in the brick and stone window details on the façade of the Ethridge bank, copies the more elaborate Classical Revival style seen in larger communities.
Posted by BrentKMoore at 7:30 AM No comments: 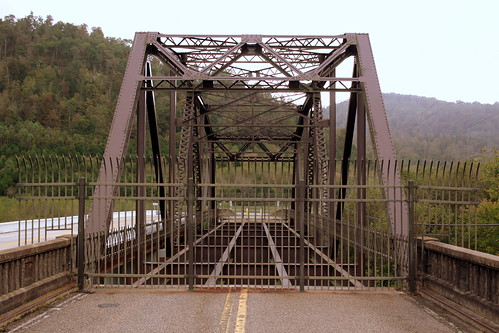 This Warren through truss bridge with Polygonal top chords opened in 1930 but was partially demolished in the 2010's. It is also known as Edward R. Talley Bridge and used to carry highway TN70 (Trail of the Lonesome Pine) over the Clinch River in Hancock County, TN. When TDOT built the replacement bridge, they left the old approach so we could still walk up to it. It was also repainted and appears green in older photos. Another spot to get a good view is the back deck at the River Place. 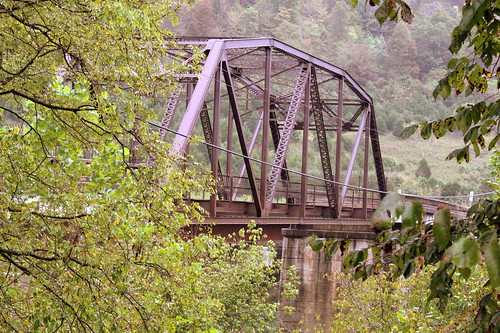 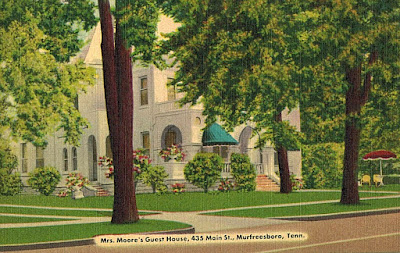 This house is on the National Register of Historic Places as a contributing property to the East Main Street Historic District in Murfreesboro, TN. Here is a description of this house from the brochure entitled "Explore Historic Murfreesboro - A Walking Tour"

435 East Main Street
The Clardy House was built in 1898 for J. T. Rather, a former mayor of Murfreesboro. This residence is an example of Richardsonian Romanesque style, featuring three wide, rounded arches supported by squat columns on the porch. Operated as the Clardy Guest House from 1948 to 2000, it was one of the state’s oldest bed and breakfast inns.

More info from The Heritage Center of Murfreesboro and Rutherford County:
There is a story that Mr. Rather, afraid of fire, had firecrackers placed in the walls when the house was built, the idea being that any fire would set the fireworks off. It remained a private home until 1948, when Jack & Henrietta Moore converted it to a guest house. In 1954, Mr. & Mrs. Frank Clardy purchased the house at auction and continued it as a guest house. 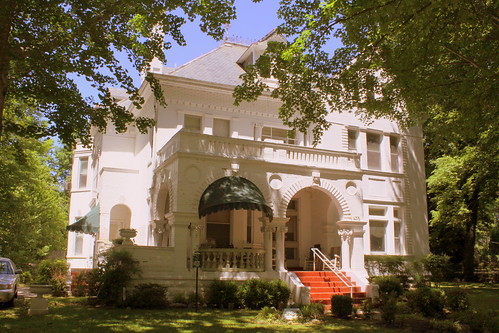 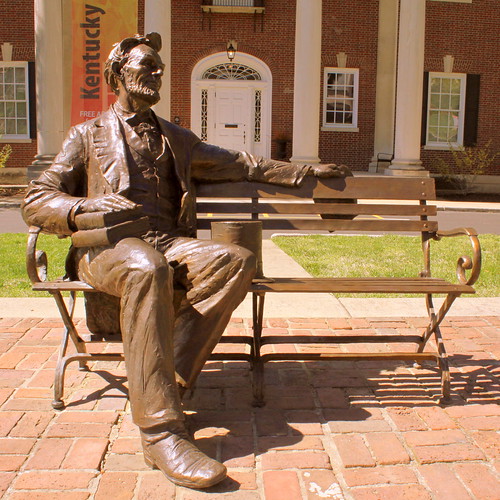 This bench with a statue of President Abraham Lincoln was placed on the Western Kentucky University campus in Bowling Green on Oct. 10, 2008. This was created by sculptor Gary Lee Price and you can read his thoughts about the statue here:
garyleeprice.com/product/abraham-lincoln/
Posted by BrentKMoore at 7:30 AM No comments: 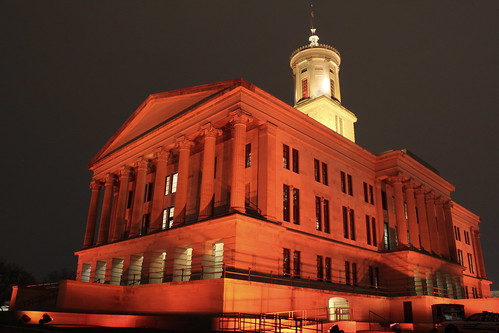 In 2012, and probably other years as well, the Tennessee capitol was red to celebrate the American Heart Association's "Wear Red Day." Several places in Nashville were figuratively wearing red for the day, including the State Capitol, The Frist Center, Adventure Science Center and Nashville Electric Service. The State Capitol is "wearing red" by placing red filters over all the lights that illuminate the building. In fact, this made the capitol look a lot like it did for Christmas. In fact, the only difference is the light inside the tower is also red instead of the Green it had on Christmas.
Posted by BrentKMoore at 3:10 PM No comments: 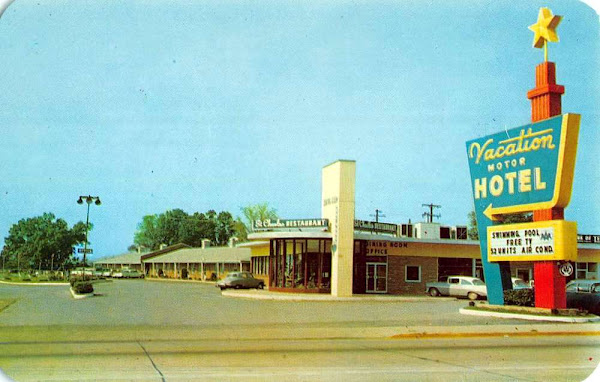 This neon motel sign looks suspiciously like an old school Holiday Inn sign. I don't know if it once was a Holiday Inn which became independent, or they just wanted a copycat sign. The motel is still open for business along highway US41A/79 in the Providence area of Clarksville. 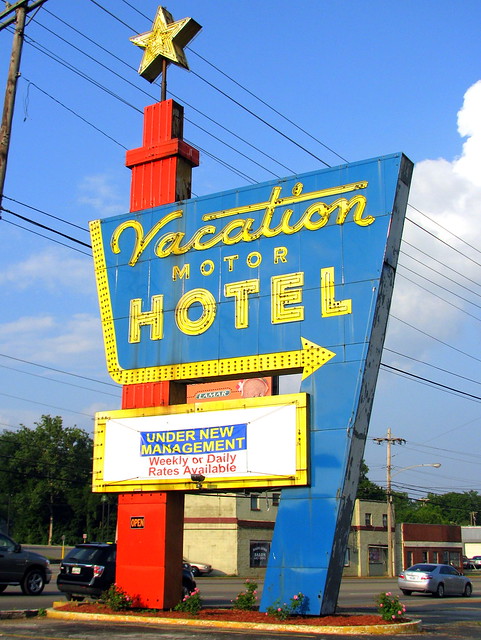 Posted by BrentKMoore at 4:30 AM No comments: 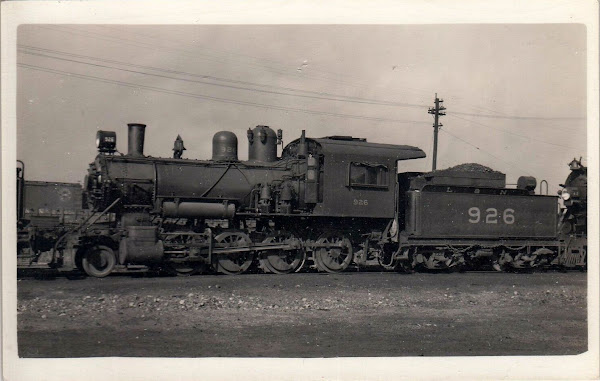