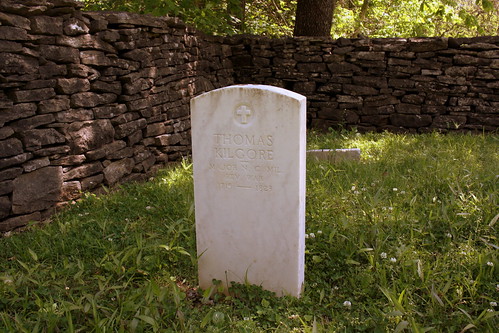 Recently, I was driving highway TN25 west from Cross Plains, TN when I saw a historic marker for Thomas Kilgore. I saw a stone wall and a gravel driveway, so I turned around to check it out.

Text of the marker:
One hundred yards south is the grave of Thomas Kilgore, Revolutionary War veteran from North Carolina, close friend of James Robertson, and one of the earliest settlers of this area. Kilgore first visited here at age 62 in 1778 and returned in 1779 to erect an important early stockaded fort, "Kilgore's Station,” which became a point of gathering and departure for the settlers of this part of Tennessee and Southern Kentucky.

This sign must have moved because the grave is about 5 yards away. The gravestone is obviously newer than 1823. Of note, Kilgore lived to the age of 108. Thankfully, someone must be maintaining this area.
Posted by BrentKMoore at 7:30 AM