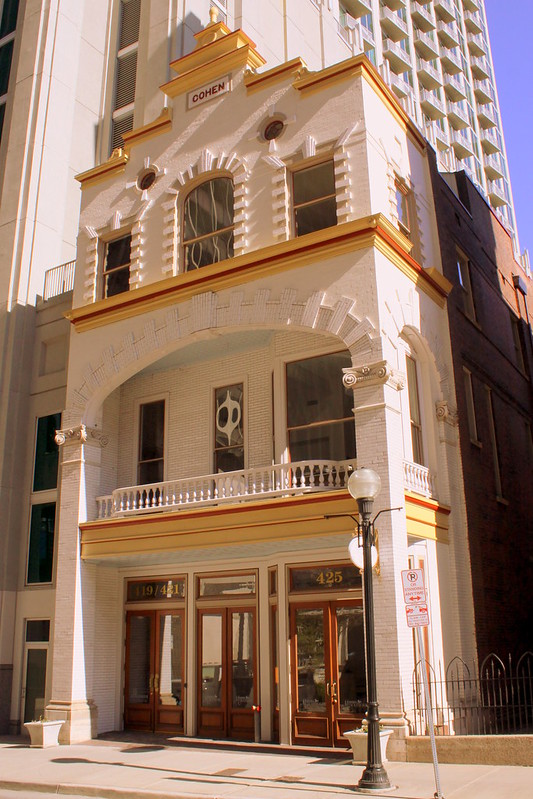 The historic Cohen Building is located in downtown Nashville along Church St. between the Downtown Presbyterian Church and the Viridian. The history of the building is taken from their website:

cohenbuilding.com/
Meyer and Etta Brinkley Cohen lived on the two upper levels, which had parquet floors, fireplaces in every room, stained-glass windows and wainscoting. Mrs. Cohen lived and entertained here from the time of her marriage in 1897 until her death in 1930. She commissioned lavish carved oak mantelpieces, stained-glass windows, and a grand staircase. In 1925, she deeded her residence and its contents to George Peabody University.

Obscured from view for a quarter-century by a store awning and boarded-up windows, this impressive building has been uncovered to reveal two white glazed-brick arches that rise from the sidewalk to the top of the second floor. Within the arches are two balustraded loggia with bay windows projecting from the second floor On the first floor of the Cohen building, Meyer Cohen ran a jewelry store. Mrs. Cohen enjoyed the balcony on her bedroom, fronting on Church Street.

Downtown uber developer and parking mogul, Tony Giarratana, has meticulously restored this once magnificent building to its former prominence. Mr. Giarratana along with Ryan Chapman have chosen the historic Cohen Building as the new home for Giarratana Development and Premier Parking.
Posted by BrentKMoore at 7:30 AM